This article will discuss the background of asylum system in Ireland and the establishment of Killarney District Lunatic Asylum.  Utilising excerpts from an assortment of government papers of the era and contemporary research, this article will explore the evolution of the asylums, the growing population trend and associated data.

A nationwide asylum system was established in Ireland in 1817, considerably before a comparable asylum system was initiated in Britain.  This legislation set the foundation for a culture of public asylum confinement and provided the legal basis for the establishment of a network of district asylums throughout Ireland.  Similar systems were not seen in England until 1845 and Scotland until 1857.  This act and the later 1845 Lunacy Act (Irish Statute Book, 1845) allowing the admittance of “pauper lunatics” to asylums brought about an excessive normalisation of the use of ‘lunacy” legal procedures to admit individuals (Prior, 2003).

The 1845 Act made it easier to commit somebody to an asylum as a criminal lunatic, even if they had not committed a crime.  Theoretically this enabled a family member who could be simply physically ill or disabled, or causing social difficulty, to be easily admitted to an asylum whilst not so easily discharged. Malcolm (1999:186) suggests that Irish relatives used the asylum as a method of restraint and control over family members who were deemed to have disorderly behavior.  On the other hand, admission procedures were far more stringent than in England, with the signatures of two justices of the peace and a medical superintendent being required.  Once admitted, however, patients had few rights; they could neither buy, sell nor inherit property, nor could they make a will. 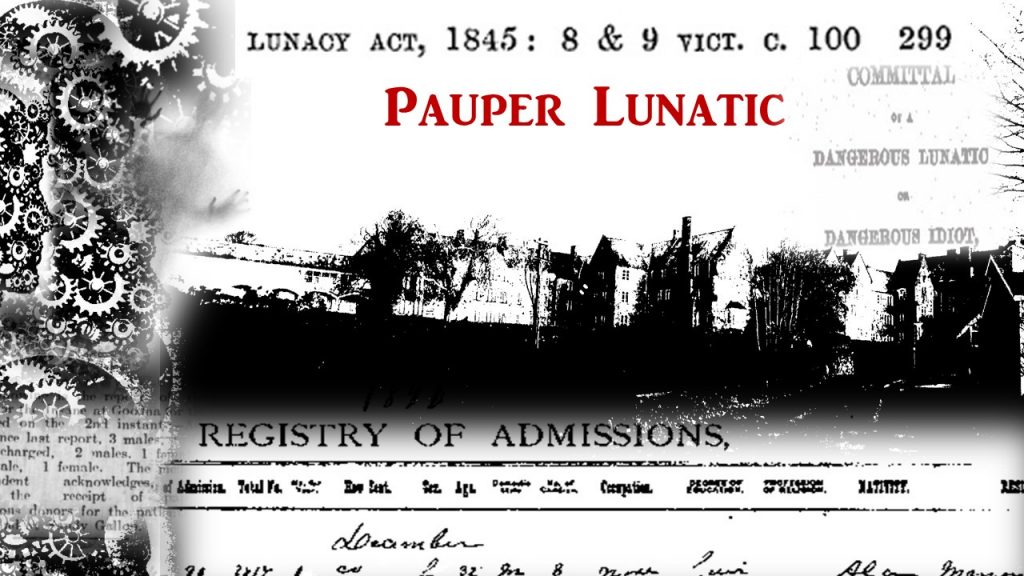 The initial assumption was that the asylums would sort out the problems caused by ‘lunatics wandering at large’ as well as curing and reintroducing the individuals back into society. Neither the policy holders or the medical staff associated with the care of the insane were prepared for the large contingency of patients (Prior 2012:223). Their optimism in the curative treatments of the asylum may well have blinded their ability to deal with the patients who stayed for long periods of time or were not discharged who most definitely contributed to the asylum population growth.

During the early nineteenth century, the care of the insane was dominated by the asylum medical superintendents, alienists, or medico-psychologists.  They advocated a movement away from restraints which had been common in previous centuries and instead a policy that focused on the ‘moral management’ of the insane, a method pioneered by Esquirol in France (Kelly 2016).  Other influences were modeled including the humanitarian style of Pinel in Paris, who sponsored a reduced custodial methods to asylum care, and Tuke’s York Retreat, founded on policies of care and gentleness, as well as medical supervision (Kelly 2016).  Their administration was legislated for by the Lunacy Acts of 1845, 1867 and 1898 which empowered the Lord Lieutenant to supervise the appointment of medical superintendents, asylum officers and nursing attendants, alienists or latter day, psychiatrist, and to oversee the day-today management of the patients.  By the early twentieth century, the asylum medics had claimed proficiency in the treatment of insanity (Wright & Shepard 2002) and established themselves as a specialist vocation, psychiatry, and experts of insanity diagnosis and classification. Consequently, this new profession and legislation, brought with them significant changes in management of patients resulting in “moral management” becoming the dominant therapeutic paradigm (Williamson, 1992) well into the twentieth century.  It is possible that the moral perception of insanity as well as the changing classifications and diagnostic criterion, could have been another contributor to increased admission rates.  Diagnosis varied with an interchangeable use of the word mania (could be acute, chronic, recurrent, mania a potu, mania of adolescence etc).  After mania, the next most common diagnosis was melancholia, which would be akin to present day depression.  Alcohol related admissions were also significant and in the early 20th century, alcoholic mania was commonplace diagnosis (Walsh & Daly, 2002:82).

The Inspectorate in Lunacy was legislated to oversee the asylum and its medical staff.  It was set up in 1846 in Dublin Castle in response to the 1845 Lunacy Act.  The inspector has a wide range of duties and powers in relation to the inspection of asylums and the patients in them.  He had the authority to inspect any asylum, at any time and published annual findings and recommendations to the government.  The reports drew on many aspects of asylum life but for this research, two main aspects dominant the agenda.  The first is the national data of the numbers in asylums and the second is the socio-demographic evaluation of the asylum admissions and residents.  The reports cover aspects such as the number and distribution of the Insane, admissions, deaths, discharges, gender and occasionally occupation.

In 1900, 77% of the insane were in district and auxiliary hospitals with 18% in workhouses.  By 1915 that figure was 86% and 11% in workhouses (Annual Inspector of Lunacy Report, 1915).  By 1930, the number was at 86.9% with 52.2% females and 47.8% of males (Annual Inspector of Mental Hospital Report, 1930). Workhouses continued to decline, now only covering 9% of the insane population in institutions.  There was a slightly lower increase in numbers from previous years but still a gain. During World War 1, there was a notable decrease (Figure 4) in the numbers of inmates in the hospitals but from 1921 onwards, there was both a national and Killarney increase in numbers.  The numbers decreased from the middle of the second decade despite the opening of a new facility for soldiers in Richmond asylum, Dublin.  There was a slight increase in the overall female population during this time but total admissions and residency remained below average.  Speculation that increased number of deaths from the war as well as increased gainful employment for individuals may have contributed to the decrease in asylum admissions.  A similar observation was noted in the UK at this time, and indeed during World War 2, Ireland’s admissions had a temporary decrease.

Figure 4: Increase and Decrease of the Number of Patient Admissions 1917-1930

Another time that records shown a temporary decrease in admissions was in 1930. Though average resident numbers had continuously increased throughout the 1920s and into the 1930s, meaning that the population of mental hospitals were on an upward trend whilst the actual number of admissions had decreased (Figure 4). The decrease resulted in a national average figure of 2,348 patients admitted in 1930 as opposed to 2705 in 1910 and 2584 in 1925. This indicated that while admissions demonstrated occasional stabilisation or reduction, residents were staying longer in the institutes. National figures from the inspectorate also confirmed that the asylum/mental hospital was progressively taking over the care of the insane from all other institutes (Figure 4)

The continued increase in admissions to the asylums and the growth of the psychiatric profession needs to be understood in context of the Irish environment. The rapid increase transpired during a lengthy era of social poverty, with high levels of unemployment, continuing emigration and at times, food uncertainty. This occurred in the context of a decline in the size of the Irish population post famine, falling from approximately 6.5 million in 1851 to just under 4.5 million in 1901, partly because of emigration (Lucey, 2015). As stated earlier, industrialisation may not have been such a relevant factor with the great majority of the population still rural dwellers living at or on below subsistence level on limited agricultural production. According to Brennan (2014:68) the occurrence of an asylum in a district provided a source of social security and therefore the asylums may have widened their role in society to beyond taking care of the insane, especially with the declining role of workhouses in the early 1900s. Individuals on the lower levels of social deprivation represented a significant section of the national residential asylum and by the early twentieth century, Irish asylums appear to have been functioning as a very basic form of welfare provision. Brennan (2014) argues that the growth of the asylum was not in response to an outbreak of insanity but more aligned to a combined societal, familial control of individuals deemed to be difficult or unusual, aligned with the newly developing psychiatric profession. This is noted from the turn of the century, in 1901, there was over 2,800 new admissions into Irish asylums. The numbers had tripled despite a population decline in the nineteenth century. By 1913, one in 154 Irish people are described as a lunatic or idiot while there were 16,941 asylum residents throughout Ireland (Walsh & Daly, 2004).

Another context to be acknowledge is the changing environment of Irish independence, the exposure of violence in the community and then the later establishment of the Irish Free State. The Department of Local Government and Public Health formally became, in 1924, the central government authority for local government and health administration. For example, the Kerry District board of guardians was abolished and replaced by Kerry County boards of Health and Public Assistance. The Minister took over the Lord Lieutenant’s duties and oversaw the still growing population of what in the 1920s, was called mental hospitals. 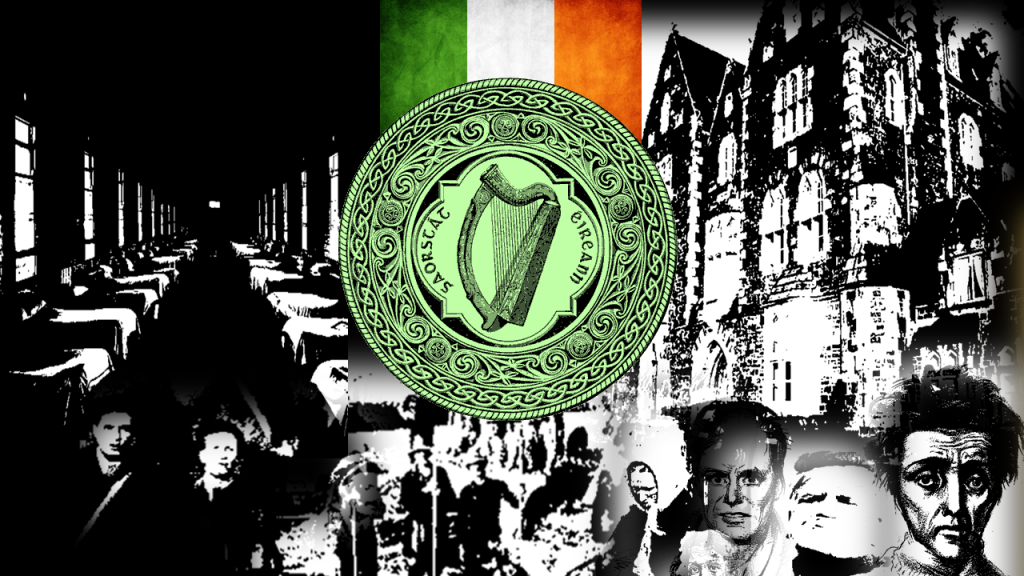 By 1925, there were 19,562 people in mental asylums (Brennan, 2014). Official policy-making of the Irish Free State was heavily influenced by the highly moralistic attitudes evident in Irish society regarding individuals who failed to live up to society’s social respectabilities. Factors such as sexuality and illegitimacy, deserving and undeserving poor, the idle and the insane (dr interview ) became driving forces in the confinement of individuals into institutes such as religious run Mother and baby homes, county homes, Magdalene Laundries, industrial schools, orphanages and state run mental institutions. The new Irish government surpassed their previous British rulers and there was an acceleration of confinement both in mental hospitals and other institutions. However, confinement in mental hospitals became disturbingly high, without any evidence of an epidemic in insanity (Brennan 2014: 17).  By the 1950s, the system had expanded to such an extent that Ireland had the world highest rate of asylum residency per 100,000 population (Brennan 2014) with over 21,000 residents or 0.7% of population (WHO, 1958.) This alarming increase happened within a society who had got used to locking away the undesirables, the non-conformists, the disabled, the perceived immoral. This all happened in the backdrop of significant political and social change, of religious dominance, world wars, trade wars, the never-ending emigration and a declining population.

Figure 7:Ireland beats USSR in locking people up in the 1950s