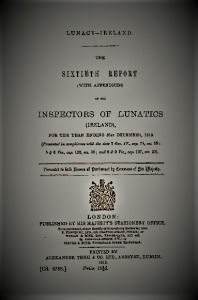 The Inspectorate in Lunacy was legislated to oversee the asylum and its medical staff. It was set up in 1846 in Dublin Castle in response to the 1845 Lunacy Act. The inspector has a wide range of duties and powers in relation to the inspection of asylums and the patients in them. He had the authority to inspect any asylum, at any time and published annual findings and recommendations to the government. The reports drew on many aspects of asylum life but for this research, two main aspects dominant the agenda. The first is the national data of the numbers in asylums and the second is the socio-demographic evaluation of the asylum admissions and residents. The reports cover aspects such as the number and distribution of the Insane, admissions, deaths, discharges, gender and occasionally occupation.

In 1894, the Inspector wrote of his concern at the growing numbers of first admissions in the KDLA. He described numerous reasons why there was a decade on decade increase in numbers. Figure 1 gives a brief summary. 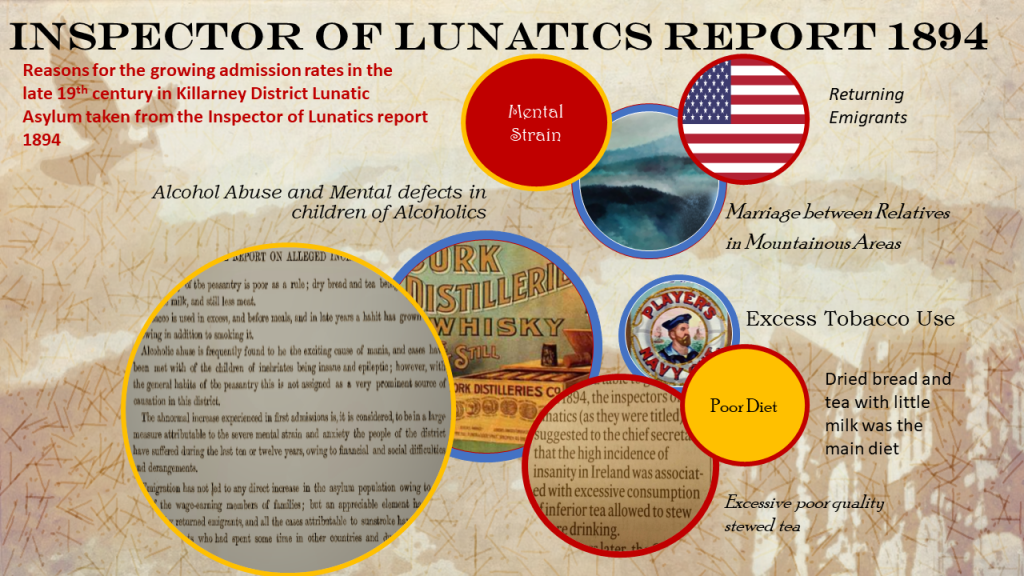 In 1900, 77% of the insane were in district and auxiliary hospitals with 18% in workhouses. By 1915 that figure was 86% and 11% in workhouses (Annual Inspector of Lunacy Report, 1915). By 1930, the number was at 86.9% with 52.2% females and 47.8% of males (Annual Inspector of Mental Hospital Report, 1930). Workhouses continued to decline, now only covering 9% of the insane population in institutions. There was a slightly lower increase in numbers from previous years but still a gain.

During World War 1, there was a notable decrease (Figure 2) in the numbers of inmates in the hospitals but from 1921 onwards, there was both a national and Killarney increase in numbers. The numbers decreased from the middle of the second decade despite the opening of a new facility for soldiers in Richmond asylum, Dublin. There was a slight increase in the overall female population during this time but total admissions and residency remained below average. Speculation that increased number of deaths from the war as well as increased gainful employment for individuals may have contributed to the decrease in asylum admissions. A similar observation was noted in the UK at this time, and indeed during World War 2, Ireland’s admissions had a temporary decrease.

FIGURE 2: Increase and Decrease of the Number of Patient Admissions 1917-1930

Another time that records shown a temporary decrease in admissions was in 1930. Though average resident numbers had continuously increased throughout the 1920s and into the 1930s, meaning that the population of mental hospitals were on an upward trend whilst the actual number of admissions had decreased (Figure 2). The decrease resulted in a national average figure of 2,348 patients admitted in 1930 as opposed to 2,705 in 1910 and 2,584 in 1925. This indicated that while admissions demonstrated occasional stabilisation or reduction, residents were staying longer in the institutes. National figures from the inspectorate also confirmed that the asylum/mental hospital was progressively taking over the care of the insane from all other institutes (Figure 2)