Some illnesses can trigger stress and mental illness. High or low thyroid levels can affect mental health causing manic mood or depression respectively. Pernicious anaemia (B12 deficiency) is also linked to neurological and mental illness. But have you heard about how the time of the year that you are born, your exposure in the womb, catching an infection, being inflammed, and your gut flora can also contribute to mental illness?

This 1 percent who globally experience schizophrenia have another pattern which is called the birth month effect.  People born in winter or early spring are more likely than others to become schizophrenic later in life. It is a 5 to 8% increase and its a pattern that is also seen in people with bipolar disorder or multiple sclerosis.

The brain is a complex organ that is very greedy for energy, and factors that affect that energy supply can have long-term consequences on the neural connections of the brain. Fuller Torrey, director of the Stanley Medical Research Institute in Chevy Chase, Maryland, is an advocate of the infection hypothesis and believes that an infection or fever is the trigger for schizophrenia. The infection theory was around in the late 1800s and early 1900s. Adolf Meyer was one of the most influential figures in psychiatry in the first half of the twentieth century who stated that psychiatric illness is the result of chronic infection akin to what patients with high fevers sometimes experience such as delusions and hallucinations. His theories gathered a lot of followers and some psychiatrists used to pull out rotten teeth or tonsils of their mentally ill patients in the search for a cure. However, by the 1930s, as the rest of the medical world focused on infectious agents as the cause of disease, the psychiatric profession moved away from it. Instead the emerging pharmaceutical and biological approach was fostered.

Meyer’s theories are gaining some interest over the last decade. There is scientific evidence how certain infections of the brain such as  Toxoplasma gondii   (one of the most common parasites in developed countries) can result in symptoms that mimic psychiatric conditions. Borna disease virus, Epstein-Barr and certain strains of herpes, including varicella zoster, the virus that causes chickenpox and shingles can also trigger mental illness like symptoms.

A study that evaluated over three million patients record in Denmark discovered that a history of serious infection was associated with a 62% increase in later developing a mood disorder, including depression and bipolar disorder. Furthermore, multiple studies have also linked elevated markers of inflammation with depression. An interleukin 1, part of the immunity’s fight against infection is known to cause symptoms of depression. Additionally, depression scores correlated with an inflammatory marker known as C Reactive Protein (CRP), a protein which is high in inflammatory conditions such as Cardio vascular disease and inflammatory bowel disease. Another Danish study published in The Archives of General Psychiatry, demonstrated that low-grade systemic inflammation can cause depression. Moreover, they discovered that even in healthy individuals, an elevated CRP was associated with a higher risk of depression. This leads to the question is depression an inflammatory disease? And if so, is there a culprit triggering the inflammation? Some anti-depressant medication can also decrease the inflammatory mediators, indicating a relationship between the neural firing and inflammatory immunity response. Not surprising really when you take into account the complex interaction of the nervous system and our immunity. In fact, infectious agents such as pathogens acting directly on the central nervous system, may result not only result in psychiatric symptoms, but also trigger autoimmune activity, resulting on the body’s immune system attacking itself. The 2015 discovery of the central nervous system lymphatic system reported in Nature, is challenging the aetiology of neuroinflammatory and neurodegenerative diseases associated with immune system dysfunction. The study states that the malfunction of the meningeal lymphatic vessels could be a root cause of a variety of neurological disorders in which altered immunity is a fundamental player such as multiple sclerosis, Alzheimer’s disease, and other forms of mental illness and neurological disorders.

Science is beginning to connect the dots of the relationship between inflammation, immunity, lymphatics and neurological system. We have known for a long time about other neurological diseases and infectious pathogens. For example, its well known that 10 to 30 years after the initial infection with the sexual transmitted  bacteria known as Treponema pallidumsyphilis, neurosyphilis can occur resutling in neurologic and neuropsychiatric disease, previously known as General paralysis of the insane. Neurosyphilis can cause a wide range of symptoms such as memory difficulties, delusional thinking, and grandiosity which has been associated with mental illness. In the asylums of the past, before the discovery of antibiotics, patients with this condition were a frequent feature of the asylum.

Our immune system is an evolutionary old part of our physiology and it works with homeostasis to fight infections, and ensure genetic survival. The immune system with its homeostasis co-worker, cortisol (often called the stress hormone but it really is so much more), does not distinguish between the sources of our inflammatory provocation. It will activate a stress response regardless if it is an infectious pathogen, sleep deprivation, physical, mental or emotional stress, abuse, grief or nutritional deficiency. Hence an immune response has the capacity to activate a mental health challenge for weeks, months or years. There is some research that also queries that this inflammatory provocation can have effects on the growing foetus in the womb.

As new born babies, we are relatively sterile from microbes when we are born. By the time we are adults, we have, on average, four pounds of gut microbes, and the combination is more unique to an individual than their own DNA. There is also increasing evidence that gut microbes effect the development and brain biochemistry. Recent work studying communication between the brain and the gut have also identified a functional link between gut microbiota and brain function, with particular attention to depression and anxiety. Our bacteria development early in life is needed for early brain development, and perhaps an imbalance might be a predisposing factor for a number of brain disorders. 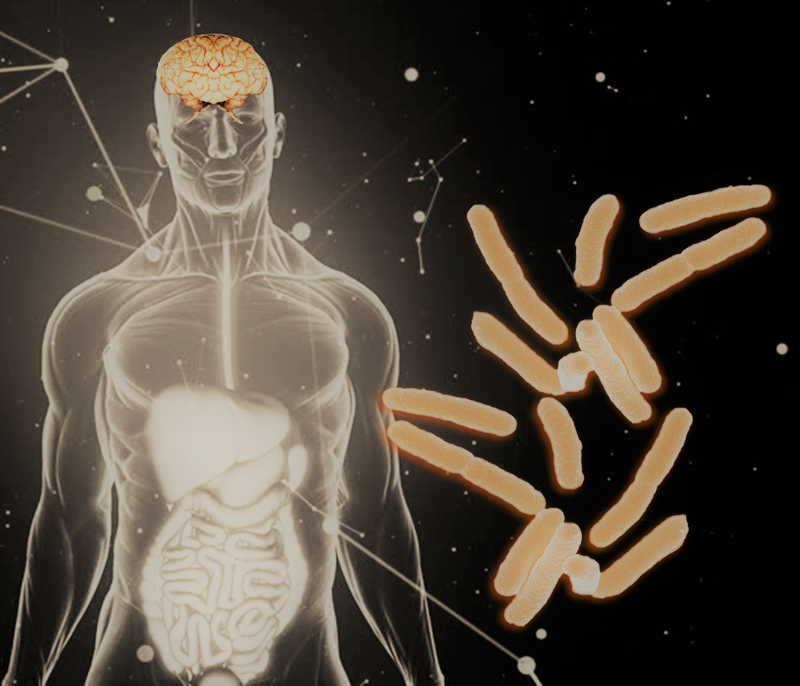 So finally, to summarise, infection, could work with genetics, psychosocial factors and our diet and microbiome to influence immune and inflammatory activity and, in turn, our risk of mental illness.

One thought on “Illness and Insanity”