Richmond District Lunatic Asylum in Dublin housed the first Irish war hospital for soldiers suffering from shell shock during WWI. Shell shock is a term originally coined in 1915 to describe soldiers who were involuntarily shivering, crying, fearful, and had constant intrusions of memory. It is not a term used in psychiatric practice today but remains in everyday use. Initially across the British Empire, military men, mostly young soldiers of lower ranks, were treated with isolation, disciplinary methods, electric shock treatment, emotional and physical re-education as well as shaming. However, by 1916, military-medical elites accepted that psychological collapse was an authentic battle injury and that ‘good men’ could succumb to it. The theory was that such military men required treatment, not punishment, as well as rest and therapuetic work and creativity. This was based on the work of Arthur Hurst, an army major working out of a military hospital in Devon. He pioneered that if the shell shocked patients were properly treated they would recover rapidly. Military men who did not recover were deemed to be not suffering simply from battle injuries but were predisposed to mental breakdown and were regarded as ‘bad stock’.

A specialised section of Richmond District Lunatic Asylum was used to catered for soldiers who had served overseas at the Western front. Some aspects of Arthur Hurst’s pioneering approach was used in the Dublin asylum, but as the admission and discharge of the soldiers was under the control of the British military, this created some hostility and disputed practices between the mental health professionals and the army. Many of the soldiers were treated and released quickly from the asylum, often discharged as ‘relieved’ rather than ‘recovered’. This sometimes resulted in the soldiers being readmitted to their district asylum to continue treatment.

However, not every Irish soldier received treatment for shell shock in the war hospital in Richmond or the second war hospital in Belfast. EH was a 33-year old single private who had served in the Royal Munster Fusiliers since the beginning of the first World War. He began to develop mental health troubles after witnessing some of the horrors of the front at the latter stages of the four-year war. On return from the first World War, he was initially admitted to Cork Military Hospital for the treatment of injuries obtained in the battlefield. By the summer of 1920, his physical injuries had healed and he was deemed to be in ‘sound bodily health’ with no tremors or physical symptoms of shell shock. The army then transferred him to the Killarney District Lunatic Asylum (KDLA) under the Army Act of 1891. He was admitted to Killarney asylum and diagnosed with mania caused by shell shock. The private complained of pains, sleep disturbances, low mood and other symptoms of shell shock. Flashbacks was a common symptom of shell shock which resulted in flashbacks of the soldiers time in the battle front, the sound of artillery, the images of bodies and other horrific experiences of the war. For over a month, he had daily symptoms of mania, restlessness and poor sleep. However, after a month in the asylum, he began to improve and stated that he ‘started to feel better’ and the shell shock was triggered less and less. He continued to improve over the following year and was deemed able to return to society and discharged as ‘recovered’ in 1921. He was one of tens of thousands of soldiers with shell shock in the aftermath of the war that were able to return to their communities. EH returned to a changed world, an Ireland in the midst of another war, the War of Independence. Its unknown how he managed in the wider community. What is known is that thousands of soldiers who had lived through the horrors of the trenches found it impossible to communicate their experiences to those who had not. Moreover, at least 200,000 Irish born men signed up for World War I, many with the support of nationalist leaders, the Church, and their communities. However, for EH, when he returned to life outside of the army and asylum, it was a far cry from the enthusiastic crowds who sang ‘Rule Britannia’ in 1914 and instead he was in a more hostile ideology towards Irishmen who fought under the British flag. It was a difficult life for the soldier who had suffered shell shock in Ireland with many suffering relapses and further admission to asylums. At least for EH, it may be assumed that he did not relapse. 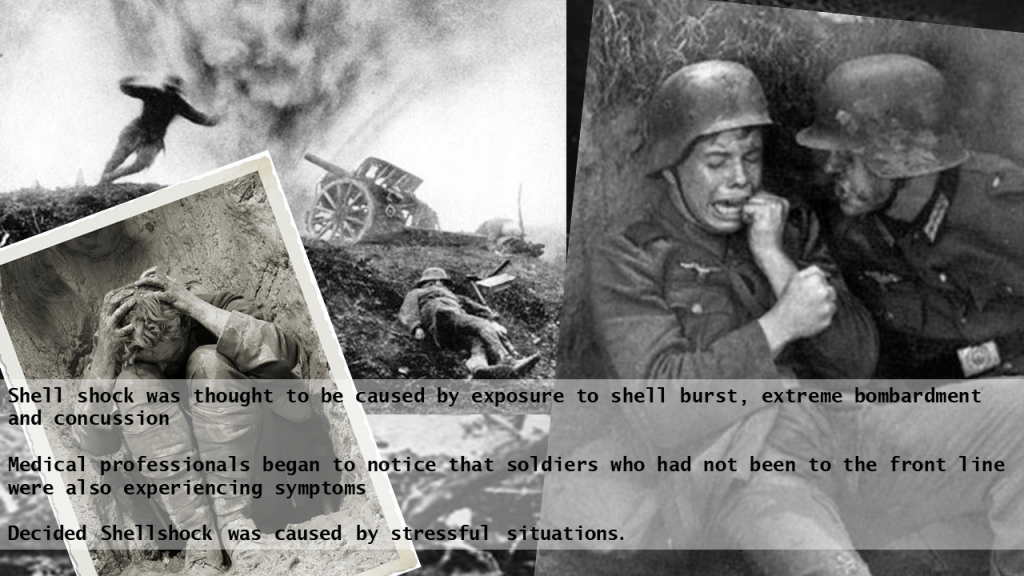 Relapses and re-admissions to the asylums were a factor for some soldiers with shell shock. JR was another private who was found in a state of distress in the autumn of 1920. He was sectioned under the dangerous lunatic act and was in an active manic state on admission. He had joined the army in 1914 and served as a private in the fields of France. By 1916 he was returned to Ireland and admitted to the Killarney asylum suffering from mania. He was confined in the asylum for some time, but eventually showed some signs of improvement and was discharged. The army did not regard him as able to return to the war and discharged him from their service. He would have been classed as one of the soldiers with ‘bad stock’ and susceptible to mental illness. a factor frowned on by the military. Instead JR returned to his community in rural County Kerry and found work as a labourer. Its not clear if he stayed in his own community or whether he moved around the county. He did continue to maintain a good standard of physical heath and appeared to be well nourished and physically strong. However, it is also not clear if his mental health was deteriorating gradually or whether there was a specific trigger. What is known is that he became a risk of harming himself or others and that by the time that he was readmitted to the asylum in 1920, he had become significantly confused and agitated and was unable to tell simple factors such as if he was married or not. He complained of pain, nightmares and sensitivity to noises. It took nearly two years before the symptoms of shell shock declined. In fact, he never got back his full mental health and was not deemed suitable for release. He was confined in the asylum until his death in 1943 at the age of 63 years. It is presently unclear what treatments he received, though this is one of my next lines of archival investigations (the treatment books, which are separate from the case history books and admission books).

It can however, be assumed that some of the British treatments for shell shock (see below) in the following film footage from 1917 are reflective of some of the treatments available in the war hospitals and possibly too, in KDLA. The enormity of care needed and the mental health damage done to hundreds and thousands of men is not however, reflected in the film.

According to Professor Jay Winter of History at Yale University,  in The Cambridge History of the First World War, there has been a major underestimation of  the number of men who suffered from shell shock. Previously, estimates ranged between two and four per cent but Winter argues more than 20 per cent of men suffered from the condition. Using Winters’ calculation, its possible that up to 40,000 Irish born World War I soldiers may have being suffering shell shock during and in the aftermath of World War I. At the very least, there was 2000 to 4000 Irish born soldier with shell shock, significantly more than were admitted to the Irish war hospitals. Winter states that medical and administrative practices and prejudice led to radical underestimates of shell shock. Additionally, the controlling and overseeing aspect of the military in the running of the war hospital units in Ireland resulted in their strong influence in what diagnosis was recorded. This may also have been a factor in the under reporting of shell shock. It was not in the military’s’ interest to have soldiers with shell shock, instead it was easier to diagnosis these soldiers with hereditary problems or mental weakness. The sooner the military could get their soldiers back to the war, the better, so if a soldier was physically fit, the aim was to support recovery as quickly as possible and return them to the battle. Along with this, the military had a disregard for any psychological effects of  physical injuries such as loss of limbs and facial injuries . This approach also caused disharmony between the Irish war hospitals and the military and not only effected the actual diagnosis but also the treatment of Irish soldiers with shell shock. Likewise, the medical profession played a part in the under-reporting of shell shock as many medical professionals were uneducated or reluctant to diagnose many injuries as psychological. Another reason may have been that a disabled soldier suffering from shell shock may find it harder to get a pension.