Early asylums developed from prison system. Jails and workhouses would have lunatic sections and when the Killarney District Lunatic Asylum first opened in 1852, the majority of the initial patients were from the Tralee jail or the Tralee and Killarney workhouses. According to Professor Kelly in his book Hearing Voices: The History of Psychiatry in Ireland, some of the procedures in the asylums came from prisons system rather than a healthcare standpoint. This resulted in some patients being chained up, while others were restrained in straitjackets. According to the Inspector of Lunacy in the mid 1800s, some asylums were particularly bad. In Limerick asylum, patients were chained with their hands placed under their knees so that they were unable to stand up resulting in a permanent disability and an inability to stand up straight. 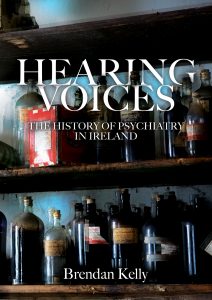 The history of mental healthcare has shown that how we treat the mentally ill in our society is far more to do with how society treats the vulnerable than any other area of social care or medicine. In 1907 at the Richmond asylum, one third of all admissions were directly from the workhouse across the road. Brendan Kelly points to his time working in the Mater in the last decade, noting that one third of psychiatric assessments in the emergency department were homeless people. Ireland has a significant problem with suicide and some sources state that mental health issues have risen over the last twenty years. A warning that the fast changing pace of the 21st century may be a new challenge to mental healthcare.